While not every puppy mill practices all of these bad processes, they all exist to make money and what they do is related to that need to profit.

We started with rescue dogs. We took the good with the bad. Then the last of those died after a long life we decieded we really wanted a puppy. Not an older dog but a dog where we can raise and train from its early life. We researched different breeds and trying to find our perfect breed. We decided that breed is Havanese. It was a good size, hypoallergenic since I had extended family with alergies, great personality and loves to please humans.

We found a pup that had all the markings we wanted, AKC registerable, with a price in the sweet spot on the internet and traveled over 6 hours by car to pick it up with my daughter. We arrived at a ranch style farm with an out building. As we pulled up to the house the breeder came out of the house with the puppy. We were so happy over this adorable pup. Initially we did not hear the barking from the out building but the more time we spent there the more it became noticable. Lots and lots of barking. Different kinds of barks. We knew this was a puppy mill because they did not hide the fact and promoted that they were state inspected and certified. We thought this is not a great situation for the dogs but it was not bad.

Just short of our dog being 2 years old he became really sick. After over $1000 in vet tests we were told he has a failing liver. The vet said it is possible he had the issue since birth and we did not have much time left with him. We spend the time to work to make him as healthy as we could again by daily IVs, medicine, and placing him on a special diet. He became more active again and was close to his old self though he never fully reached the fun loving little guy he once was. He survived another 9 months with us after all that happy and loved.

After learning what the vet said about his health possibly being an issue from day one and lots of reading on the internet you start to see how these mills operate. The breeder was not concerned with quality, it was all about profit. We did not want to repeat that experience again or support a mill.

While we were having our experience with the Havanese our daughters wanted to get a dog of their own and they selected the Pomsky. As we gained experience with that breed it was not long until that was a breed we fell in love with. 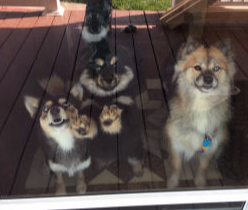